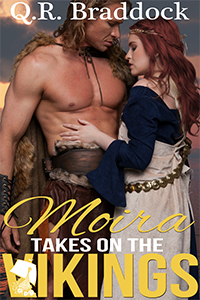 Barbarians, heathens, devils. Many things have I heard the notorious vikings called, but savior was never among them, until they draw me out of the frigid ocean, rescuing me from certain death. They saved my life, but can I trust these handsome savages to bring me home safely? The price is dear and innocence my only coin. I should be afraid, but the feel of their lusty, battle-hardened bodies over, under and against my own has lit a fire inside me that no one man can quench. ‘Tis good that what the crew lacks in manners, it more than makes up for in hard, enthusiastic men.

Free until November 16th! Pick up your copy at Amazon, Amazon UK or your favorite amazon storefront. Also available on Kindle Unlimited!

Writing vikings is near and dear to me since I’ve always been a fan of them. This book actually stars the same crew that raided Vivienne’s village a few books ago, but this time someone else might become the lucky guy that makes off with Moira. ;)

As with every release, I hope you guys enjoy it, and if you do, it would make me so happy if you were to leave a review! It helps my sales, which in turn makes me able to write these stories for you. Thank you for reading!

Excerpt: Up close, he smelled of the sea, salty and briny. He loomed, his broadness and power more imposing up close. No man had made me feel so small before. Between us was his thick stiffness, the flare of the swollen head seeping a drop of clear liquid. How something of that magnitude should ever fit was unfathomable. I prayed he knew what he was about.

I expected him to thrust himself into me, but instead he bent to my breasts and put his teeth on a nipple, just a soft pinch. Its effect was immediate, like a lightning flash coursing through my body, striking ground deep in my core. I drew a sharp breath in surprise while my nipples crinkled into hard little pebbles under his lips.

His grin was that of a predator toying with its prey, his shark to my minnow. He traded between my breasts, covering them in kisses and little bites. Already I quivered beneath him, and we had barely begun. His short beard was rough on my skin, but even so he made my pulse race.

Making a trail on my chest, he kissed and licked his way to the hollow of my throat and up to my neck. My eyes widened when the blunt head of his manhood nudged against me. Opening my legs wider, I waited nervously.